She has always been one surprise after another…

For legitimate reasons, we believed a second child was not in the cards for us. So imagine our surprise when we were dealt a miracle! I was certain we would have another boy, just like our first, with jet-black hair and rich olive skin.

On delivery day, my husband and I were relaxing in a birthing suite at New York Hospital – very civilized. After an epidural (mine) and a nap (his), we started watching a movie, starring Bette Davis and Charles Boyer. I never saw the ending because, with only minutes left, my doctor decided that I looked “too comfortable.”

Upon examining me, she turned to her nurse and said, “Let’s go!”

Suddenly, off went the television. Poof! Bette and Charles left me alone with a doctor and a nurse scrambling around the room, and an anxious husband standing over my bed.

My husband informed me that let’s go meant let’s go right now! “You didn’t see the look on her face,” he whispered.

My doctor looked at me askance (priorities anyone?) and then told me to push.

Now, if you’ve ever expected a baby, I’m sure some thoughtful, kindhearted person has shared horror stories of women pushing for hours and hours… Me? I pushed once and only once, possibly setting a land-speed record in childbirth. I should have known right away that this little one would be a force of nature.

She draws you in…

When the doctor handed her to me, she took my breath away– a perfectly round head covered in wisps of wavy hair, the color of pale summer wheat. She had full pouty lips and skin so creamy and translucent that she seemed illuminated from within. Her eyes were the color of emeralds. This little thing I cradled to my chest looked like a peach with the Gerber baby’s face superimposed onto it.

I fell completely and instantly in love.

If she felt the same way, it was not immediately obvious. Her hands were drawn up to the sides of her little fruit face, fists clenched and she was screaming more loudly than seemed possible for a person her size. Since we’d only just met, I didn’t take it personally.

Now that I’ve gotten to know her better, I can tell you that everything about my girl, and everything to do with her, is not what you’d expect.

There is no lay-up. There’s never a preamble. She glides and pirouettes with the shifting winds of her own creativity and goes wherever her ideas take her. And just when you think you know where she’s headed, she chicanes. A human plot twist on wheels is she, and I defy anyone to pin her down, or anticipate her next move.

She is a typical teenager…

She has a Tumblr account, Skypes with other kids, wears a ton of bracelets, plays the guitar, and loves to dye her hair crazy colors.

She is unlike any other…

She’d rather hang out in a library than go to a shopping mall, prefers writing with a fountain pen, hand-tats Victorian lace using an antique shuttle and is a loose tea connoisseur.

Take for example the time she saw an open casting call, a paying gig, for a sketch comedy troupe in Manhattan. You know the Manhattan I’m talking about, right? The one filled with tens of thousands of unemployed actors who’d pummel each other just for the chance to wear a sandwich board in Times Square, if it meant having a job? Well, she asked if we’d drive her to the audition (because 15-year-olds don’t drive). As parents, we wanted to protect her and grappled with preparing a soft landing pad: Just so you know, sweetheart, it’s kind of a long shot… We’re so proud of you for trying, but… Instead, we decided to mind our own business and say nothing – which turned out to be the right thing because they hired her on the spot.

That’s the stuff from which she is made. She floats through life like a curious butterfly, winging it from one thing to another, lighting just long enough to gather an experience and then off she goes again, on to the next thing.

Me? I could never be like her. I am a planner. I like things organized. All the labels in my refrigerator face forward and my drinking glasses are arranged in the cabinet by size, shape and color. According to my calendar, I know exactly what I’m doing through to 2015. I don’t have OCD (Obsessive-Compulsive Disorder), but living with her has turned me into the OCD (Ordered-Chaos Director). And while I can’t be certain, I’m guessing she was put here to teach me about spontaneity.

She is a parenting challenge…

Living with a person like this will keep you on your toes, I promise you.

So I don’t know why it came as any shock when she announced that she wanted to go to boarding school.

Everything was in place for her to attend our local high school, which is within walking distance from our house. I had mapped out the entire academic year in my head and that map did not lead to a school in another state, 150 miles away. But she had heard about this wonderful place and asked my husband to research it. He thought it was a great idea and made an appointment for a tour and an interview.

Did I mention that this all happened over the course of 48 hours? Did I also mention that I was dead-set against it? Now don’t get me wrong. Of course I want the best for both our children, but before her brother left the nest, there were four full years of high school to prepare for his departure. I knew what was coming. With her, I had no warning at all.

On the day of the appointment, I grudgingly went along for the ride (which was very scenic), took the tour of the school (which was quite impressive), agreed to an interview (which was certainly pleasant), and fell in love with the place (which was very sudden and surprising to everyone, especially to me).

With only two months to prepare, I vowed to make the most of our last scraps of time together. We spent the final week of August lazing by the shore. We walked along the boardwalk, shopped, got matching henna tattoos, and sampled fudge and frozen custard (the sweetness of which could not compare to those afternoons with my daughter).

Contrary to everyone else’s opinion, I will be fine. So what if she has occupied one-third of my waking thoughts and commanded so much of my attention for all these years? What does it matter that, since her brother started college, it’s been just the two of us at breakfast, after-school or whenever hubby is at work or traveling?

I am adjusting. She’s doing it, so I can, too. Right? Here’s how I cope: I imagine that she’s there with me when I have my morning coffee. I feel her presence in the passenger’s seat as I run my errands. I pretend she’s holding my hand, like she always did, when I have to do something that scares me. But there’s one thing I haven’t worked out yet: when I need her advice, I won’t be able to ask her, or call her, or text her. You see, she gives great advice, but I don’t want to interrupt her while she’s busy studying, and getting to know her roommate, and making friends.

She is my best friend… 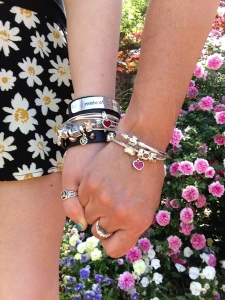 Conventional wisdom and all the experts say that Rule Number One of childrearing is: Do not become your child’s best friend. That’s a boundary that should never be crossed. “Be the parent!” they say.

I always thought this advice was based on the principles of respect and discipline. If your child views you as a friend, she will not take you seriously. She will not listen to your rules. By relying on you for friendship, she will be hesitant to make friends of her peers.

Well, my daughter does respect me, and listen to my rules, and has never hesitated to venture out into the world.

So, here’s the real reason: Parenting Rule Number One exists not to protect the children, but rather to protect the parents. (Notice I said she is my best friend, not that I am hers.) When our offspring leave the nest, they will be on to their next adventure. They will be forging relationships and making friends and learning about themselves outside the context of their family. But you, my dear parent, will be left behind.  You’ll be sad, and you will be worried and you will be lonesome.

Photo by Paola A. Bowley Photography

I know all this to be true, because she moved out 3 weeks ago. The whole house feels different. And even though she’ll be back, she will be changed. Heck, she practically changes on a daily basis. She will be more mature. She will be more self-sufficient. But there is one thing that will be forever constant: I will always break Rule Number One and she will always be my best friend.