Fluffy Got A Brazilian

Throughout history, hair has gotten a lot of attention. Entire books have been devoted to the subject, it is the stuff of legends and lore (Lady Godiva or Samson, anyone?) and pretty much every American parent has made a big deal of their child’s first haircut. 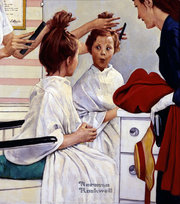 My own daughter’s first trim was at the hands of a five-year-old boy who lived across the street. I still have the curls and the story (which I might tell you some other time).

Certain religions and cultures have extremely strict rules about whether locks can be shown or shorn. In fact, fringe groups have used hair as a means to commit hate crimes on others – such as the scandalous and bizarre Amish haircutting attacks in Ohio.

There are some pretty weird old wives’ tales about hair, too: Never cut your hair when you’re pregnant. Eating bread crust will make your hair curly. Redheads are a handful! (Full disclosure: I think that one might have some merit, although you can’t believe everything you read about Lindsay Lohan or Prince Harry.)

So with all this import placed on hair, it stands to reason that, when we find good hairdressers, we stick with them. My own stylist, Frederic, was fresh from Paris when I met him. In fact, he could barely speak English and I was one of his very first clients in the United States. I remained faithful to him for over 14 years, even though I knew he was regularly running his fingers through other women’s hair. We no longer see each other because, somewhere along the line, he became a huge success. His haircuts, which I thought were steep at $65 back in the 1990’s, gradually escalated to cost many hundreds of dollars. I do love my hair, and Frederic, but a girl’s gotta draw the line somewhere. So I bravely put my head in others’ hands until I found love again (thank you Amy & Barbara!).

I feel the same way about my dog’s groomer. Donna loves Fluffy and is wonderful with her. Fluffy adores Donna, too and her dog Santos. Her romantic attachment to Santos is an added perk to being primped. So, when Fluffy needs sprucing, Donna is our go-to gal.

However, once while on vacation, Fluffy had a grooming emergency. I won’t embarrass her by giving away the details, but let’s just say there was an “incident” that may, or may not, have involved another dog…a much, much taller dog…with either the very best or the very worst aim imaginable (depending on your perspective). Anyway, we had to take care of our girl and time was of the essence. So we took her to a pet store chain that offers salon services.

When we arrived, they provided us with a list of options. We sprung for the “full-service,” which included bath, cut, blow-dry, nail trimming, and ear cleaning. Nowhere, nowhere on that list did the words Bikini Wax appear! And why should they? In the first place, dogs don’t wear bikinis.

In the second place, I can’t imagine, for the life of me, how one would execute such a treatment on a canine. Yet when we retrieved her, her poor little hoo-hah was completely bare-nekked. And I mean completely. Having never been so denuded before, she was unaccustomed to the feeling of air whooshing around her private puppy parts. It was traumatizing for her. As a result, she did not want to walk, stand, or assume any position that allowed her nethers to be exposed to the elements.

Until things got back to normal, we had to take her for “carries” rather than walks. Thank goodness her hair grows fast.

That misadventure taught us a few lessons that I will share with you now:

10 responses to “Fluffy Got A Brazilian”