It is a warm July evening in 1964. A gift arrives in the mail for my brother Dominic’s 10th birthday. Our Uncle Louis and Aunt Rosemary have sent him the one and only thing every kid wants in 1964: the coveted Meet The Beatles LP.  I am only three-years-old, but know who the Beatles are and I can feel the excitement in the house. 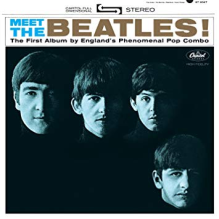 So precious is this gift to my brother that he doesn’t take the plastic wrapping off the dust jacket right away.  We huddle around him as he reads the back of it to us.  Then, with great care and anticipation, he slips the album from the cardboard, painstakingly holding it by its edges, and puts it on the turntable. He ever so gently places the needle on the spinning vinyl.  It makes that quiet silky hiss and then, BAM, Paul McCartney wants to hold my hand.  Singing and dancing fill the living room.

At some point, we decide to perform along with the songs. After all, there are four of them and there are four of us.  Dominic and Michael play along on their Mattel Strum-Fun Getars. Since we only have two of those, Diana plays air guitar and I pretended to be Ringo on my imaginary drums. [Side note: Diana and I had the moptop hairdo before the Fab Four became famous, although I can’t say with confidence that they copied us.]

I remember seeing “the lads” on The Ed Sullivan Show and asking my mother, “Why is everybody screaming? They can’t hear the music!”

So, as you can tell, I grew up on the Beatles.  My husband did too.  When our own kids were little, we gave them a proper Beatles education and would quiz them, “Listen carefully.  Is that John or Paul singing?” “Did you know there was another drummer before Ringo?”

Somewhere along the way, the music gods smiled down on us all and created a satellite radio station devoted entirely to the Beatles. If you get in my car, that’s likely what you’ll be listening to.  When my husband travels with me, he’ll look up facts about the songs and the stories behind them.

It was on one of our drives that we learned something that has been wrongly speculated about for decades: Yoko Ono did not break up the Beatles.  So, quit blaming her, people! Many music historians believe it was actually Maxwell’s Silver Hammer that drove the final nail into the coffin.  You see, John, George and Ringo hated the song. But Paul apparently had them rehearse it over and over and over. There were disagreements about some other songs as well.  For their part, Ringo and George were the peacekeepers.  Ringo wrote Octopus’s Garden to reflect his dream to escape all the discord. George wrote  I, Me, Mine about the ego problems plaguing the band. It’s funny to note that some of the later songs were written to kind of insult each other. And yet, they recorded them together, so their bond was undeniable, despite the tension.

As you can imagine, with all this Beatles love in the house, we were eagerly awaiting the release of Danny Boyle’s movie Yesterday.

I will not offer up any spoilers but I will tell you this: We loved it!  I laughed, I sang along, I cried a little and then laughed some more.  If you haven’t seen it yet, what are you waiting for? The eighth day of the week?

Anyway, after the film, my daughter asked me, “Which was your favorite Beatle?”

Without hesitation, I said, “George.”

“That figures,” she said with a smile. “The quiet one.”

Since then, I’ve been doing a little more research on George.  A lot about him seemed very familiar.  And then it hit me…I am, in fact, married to a “George.”

My husband practices meditation. He is a talented musician in a band with three other guys. He’s fab. And yes, between the two of us, he’s definitely the quiet one. 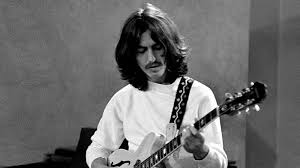 6 thoughts on “The Quiet One”