“Aha! I knew it!” I could hear my daughter’s squeaky little voice coming through her bedroom door. She was maybe about 7-years-old at the time.

Emerging triumphantly into the hallway, she began waving something in my face. At first, I thought it was a grain of rice, but her maniacal grin revealed a new gap along her bottom gums.

“Look!” Sure enough, she held one of her baby teeth between her fingers. “I lost this last night, but I didn’t tell a grown-up…and this morning, the tooth was still there…and there was no money! I knew the Tooth Fairy wasn’t real!”

My daughter eyed me suspiciously. Then declared, “Well, I don’t believe she exists.”

I’m not going to lie (to you). This stung me. She was still so young and I was not ready to see her give up on those charming childhood traditions.

Deciding to push another button, she added, “And I don’t believe in the Easter Bunny either!”

Seeing that I was still squarely on-kilter, she pounded the final nail into my mommy coffin… “Or Santa!”

NOOOO! Not Santa! On the inside, I died a little bit that day. But on the outside, there were no cracks in my façade. I knew that my reaction would either prolong those fairytales for a little while, or make her a cynic well before her time. 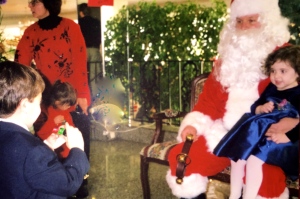 Without skipping a beat, I called her bluff, “Gee, that’s too bad.”

“Why?” She looked worried.

“Because when you stop believing, they stop coming.” I had her right where I wanted her. But my girl is pretty cagey, having not fallen too far from the tree.

“Hmm…” she thought for a minute. “What if I fake believe?”

Incredible, I thought. This kid is relentless. But I just shrugged my shoulders and calmly said, “Nope. That’s not how it works.”

“OK, fine,” she grumbled as she left to replace the tooth back under her pillow.

Turning on my heel with my head held high, I went into the bathroom, shut the door, and ran the shower to conceal the sound of my sobbing.

My son is a different animal entirely. He instinctively knew it would be sad for me when he “learned the truth” about Santa. I should probably confess here that when I discovered he’d outgrown Baby Gap and graduated to Gap Kids (as was explained to me by a cold-hearted sales associate with no soul), I literally started crying right there in the middle of the store. 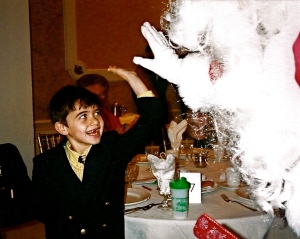 Anyway, it was a few days before Christmas when he said he needed to talk to me. He had that look people get when they know they’re going to tell you something you’re not going to like, but have to tell you anyway.

“I have a confession to make,” he began.

You’re 12, I thought. What could you possibly have to confess? I felt a chill run through me.

He stammered and stalled a little bit. Unlike his little sister, he was trying to let me down easy. “Well…I snooped.”

“I looked under the bed in the guest room…”

I immediately knew. And he knew that I knew. You see, all the presents from Santa are wrapped in distinct “Santa” wrapping paper with special gift tags (written in a curlicue hand that does not resemble mine), and stowed under the guest room bed. He had found his presents from Santa when Christmas hadn’t happened yet. This inconsistency in the holiday timeline could not be wriggled out of. I was trapped.

With wide eyes and a sweet loving heart, he said, “I’m sorry mom. Don’t feel bad. I’ve actually known for a while now.” And he put his arm around me. “But don’t worry. I won’t tell her.” The her he was referring to was, of course, his little sister. He was blissfully unaware that she’d already pulled the plug on me during the Tooth Fairy fiasco.

But now, here’s the funny thing about all this: kids really don’t know everything. If they thought for a moment about all those visits to St. Nick (such as the one that I previously documented here in SNORK) they would know that he does exist.

I have never stopped believing. In fact, every year, hubby and I pay that sweet old elf a visit before we go to see the tree at Rockefeller Center. And every year, he is just as jolly and warm and welcoming as the year before. And every year, as I’m walking through Macy’s Santaland, I am a child again, believing in peace on Earth, goodwill toward man, and the everlasting spirit and joy of the season. It fills me with a kind of love and comfort that can only be described as magical.

One day, my kids will experience this same enchanted feeling again. How can I be so sure?

2 thoughts on “Believing is Believing”