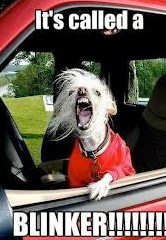 There used to be a white-hot rage ever-present beneath my good-natured exterior.  People wouldn’t have believed this about me, but if you’ve ever been a passenger in my car, you might know what I’m referring to.  Yes.  I admit it.  I have occasionally been “roadragious.”  [If you’re clacking your tongue already, you’d better pace yourself.  It gets worse.  Read on.]

For starters, and in my defense, I have never been the aggressor on the road.  This is one of the reasons I’d get so mad in the first place.  Imagine, if you will, little me behind the wheel, feet barely touching the pedals.  I’d be doing what I love most… singing to the radio.  Or sometimes, I’d be deep in thought…going over my day’s agenda or dreaming about something cheery (like Christmas or cookies…or Christmas cookies).  And then – from out of nowhere –some lunatic would manically target me and cut me off…or get so close from behind that I could see spinach between his snarling teeth…or blare his horn like Gabriel – only it would be much scarier than the end of the world.  Why was everybody picking on me?

Like flipping a switch, over which I had no control, my blood pressure would skyrocket and I’d start swearing (to myself, not to the offender).  “What the bleep is this bleeping bleephead doing?”  And so on.  Sometimes (ok, often) I’d do it with the kids in the car.  My son once commented, “I didn’t even think you knew half of those words, mom!” [Yes, this would be a tongue-clacking opportunity…knock yourself out.]

My sister pointed out to me that, because I was spewing all this negativity into the atmosphere, karma might be gearing up to bitch slap me pretty hard.  So I began adding the words “my friend” to my profanities.  For example: “What the bleep are you bleeping doing, my friend?”  “Are you out of your bleeping mind, my friend?”  Somehow, I thought this might trick karma into thinking I was being loving and kind, by embracing my aggressors as my friends.  Look at me karma! I’m Gandhi of the highways!

There have been times [CLACK ALERT] when my anger has gotten the better of me, and I’d “exchange pleasantries” directly with other drivers.

I once got into a shouting match with a police office.  It’s a long story, but here’s the condensed version: he pulled me over, out of a funeral procession, because he thought I had my cell phone up to my ear (I was leaning on my hand, in which there was a tissue).  When he realized I couldn’t have been on my phone, because it was zipped up in my purse…on the back seat, he did not apologize for the misunderstanding.  No, instead he began mocking me because the procession was long gone and I had no idea how to get to the cemetery.  Rather than help me, he stuck out his bottom lip and said, “Oh poor you.  Looks like you’ve got a problem now, doesn’t it?”

So there I was, alone in the car, mourning someone’s passing, upset that I was lost, feeling defenseless, and furious at my friend’s atrocious conduct.  Cop or no cop, rage seemed like a totally appropriate reaction.  I unleashed a wild-eyed rant worthy of a straight jacket and an academy award.  I have to assume he didn’t have a dashboard camera running, because that video definitely would have gone viral on YouTube.  He neither arrested me, nor ticketed me, because it’s not illegal to rest your head on a soggy Kleenex.  It’s gross…but not illegal.

Probably the worst incident happened after a particularly animated “chat” at a traffic light.  A driver pulled up along side my car, to offer me a helpful driving tip, “You’re not supposed to stop at a yield sign, you stupid bleep!”  He had the warm and fuzzy personality of a mud wasp and the good looks of a rabid bulldog.

“I stopped,” I explained, “because I couldn’t see if the intersection was clear.”  This was my first mistake – why did I feel the need to explain myself to my friend?

Apparently, he didn’t care for my clarification, because he then called me a “dried up old BLEEEEEEEEEP” (the most vile thing a man can call a woman)…and he did it in front of my 4-year-old daughter.  [Clack your tongue at that one, why don’t ya!]  It all went downhill from there, until the light changed.  And then he was gone – or so I thought.

Later that night, my husband and I took the kids to a local restaurant for dinner.  Can you guess who was sitting at the next table?  Right-O!  I had already told Hubby about the incident.  Now, he got to see the bulldog first hand.  As Hubby turned to have a better look, the bulldog asked his dinner companions, “Is this bleep gonna stare at me all night because his wife’s a bleep?”

No need to go into details here, except to say that Hubby defended my honor, in a dignified way and without violence or expletives.  The bulldog put his tail between his legs and skulked out of the restaurant.

I am proud to say that I no longer engage in the crazy and dangerous behavior of a road raging nut job  – and, in part, I owe some thanks to the bulldog.  Yup.  He taught me that when drivers act aggressively, it’s all about them – not the person they’re targeting.  I mistakenly took it all personally.  Seeing the bulldog in action (not once, but twice in the same day) illuminated the fact that some people are simply not very nice (or in his case, completely horrible).

So now, I practice these simple techniques to keep my temper on the road (or really off the road):

1.  I leave the house well ahead of time.  Running late always makes me tense and anxious.  Having plenty of time to get somewhere removes unnecessary stress from the equation.  So, if you see me sitting in front of your house – two hours early for a dinner party – just ignore me.  I keep snacks and reading materials in the car for just such occasions.

2.  If I look in the rearview mirror and see someone getting too intimate with my bumper, I change lanes to let him pass.  If that’s not possible, I just stop looking in my rearview mirror.  It’s like magic – he completely disappears!

3.  When someone flips me the “bird” or blares his horn at me, I offer a sincere smile with a thumbs-up.  Surprise!  It’s not the reaction people expect.  It’s so confusing that they don’t know what to do with it.  They just drive away, slack-jawed.

4.  If I find myself unable to cope, using steps 1-3, I just tell myself that the other driver is rushing to the hospital for the birth of a long-awaited baby, or running for his life from a drug lord like Walter White.  Either way, they can’t help themselves.

If you are prone to road rage and find my methods ineffective for quelling your inner beast, then get yourself a bus pass or a chauffeur (which ever suits you).  For everyone’s safety (including your own), check yourself, my friend!

Now, let me get you some ice for that swollen tongue of yours.

6 thoughts on “My Friend”