If you were driving from Southhampton to New York City, late on a summer afternoon in 2006, you may have seen something peculiar. Many people did a double-take, disbelieving their eyes. Is that…? No, it couldn’t be…

It wasn’t a bird. It wasn’t a plane. It was Hubby, tootling along Route 27. He had the top down on his car, with Buttercup in the rear. She was on her back with her legs sticking straight up in the air. Not very ladylike, even for a cow. But that’s the only way he could fit her in his car. Allow me to explain…

We own a red barn. You can’t have a red barn without putting a cow in front of it. You simply cannot. So one day, while in the Hamptons on business, Hubby passed an establishment that sells lawn thingamajigs. They have wishing wells, planters, gazebos,…and cows!

Each cow was slightly different in size and pose. Hubby made his selection, paid $250, and asked the proprietor (I’ll call him Mr. Tchotchke) to ship it. Mr. Tchotchke said delivery would cost another $250.

With that, he dropped the top, turned the cow upside-down and wedged her into the back seat. As he drove home, people were staring, pointing, taking pictures, mooing…it was quite something, according to Hubby. In fact, when he called me from the road, to say he had a surprise for me, I could hear people beeping at him. I didn’t think much of it…just assumed he was driving like he usually does.

When he pulled into the driveway, the kids and I were taken aback for a second. What the…? Is that…a cow?

Before we took her out of the car, we had to get some photographic evidence, lest anyone think this was a fish story, rather than a cow tale. Then we arranged her in front of the barn – a little to the left, a little to the right, yes! Right there! She looked fantastic, which immediately made us think that someone would definitely try to steal her. 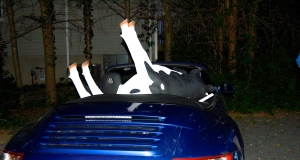 Hubby’s wheels started turning again. This time, his solution was to drive 4-foot stakes into the ground and secure the cow to them with aircraft cable. Unless the cow was Houdini, she wasn’t going anywhere.

For the next 7 years, the community got to know Buttercup, as she came to be called. Children would run into the yard to see her. Parents would perch their kids on her and take pictures. People referred to our house as the one with the cow. Buttercup became a neighborhood staple.

Every year, somebody would try to kidnap her. We could always tell, because the stakes would be pulled out of the ground a little bit. But Buttercup remained secure.

Until this past Saturday.

While Buttercup was minding her own business, some depraved criminal snuck into the yard, cut the cables and walked off with her. Walked away carrying a cow! How is that even possible? Nobody saw a thing. Not even me. I’m ashamed to say I didn’t notice she was missing until a neighbor called and told me. I’m ashamed because, clearly, I had taken Buttercup for granted. If I didn’t know better, I’d think she had run away in search of a more attentive family.

So, what do you do when somebody pinches your cow? The first thing you do is create a Facebook page, of course. I set up Cowgate: The Search For Buttercup. Then, I called the cops. An officer came to the house, and a report was filed. Period, I thought, that’s the end of it.

I started getting Facebook condolences about Buttercup. People were sad, upset, and even outraged that anyone would steal her. Several offered to drive around looking for her. One friend posted a reward for Buttercup’s return. The outpouring of support really touched me, but I wasn’t prepared for what happened next.

Two days after the heist, I received a call from the Detective Sargent of our local police department. “Mrs. Rosner, I’m sorry about your cow,” he said. “I know you’ve had it forever. Every time I pass your house, I notice it. I want to try to get it back for you.”

I was speechless. The Detective Sargent continued, “Do you have any pictures of it? One from the front and one from the side would be best.”

“Like a moog shot?” I quipped. Dead silence greeted me on the other end of the line. I had to remind myself that this was police business…no time for jokes. Clearing my throat, I said, “Oh sure. I have some photos.”

He gave me his email address so I could send them.

“Are you going to put up flyers or something?” I wondered about the next step.

“I’m going to put out a bulletin. A statewide bulletin,” he said.

Statewide? I tried to imagine the reaction such a bulletin would illicit in the police departments of the Bronx or Greenwich Village or Niagara Falls. How would they respond to a report about a missing melamine cow from Westchester County? Would they put a detail on it right after roll call, like on Hill Street Blues? Would this become a ripped-from-the-headlines episode of Law & Order?

As of this writing, the cow is still on the lam. If there’s any news, I’ll post it on the Cowgate Facebook page.

In the meantime, we wait. But I know that my friends may never spot her in the woods, or floating on the lake or tossed by the side of the road. And despite his best efforts, the Detective Sargent might come up empty-handed.

I can see you. Yes, you! I know you think this whole thing is ridiculous. But you’re wrong.

At first glance, it doesn’t seem very significant in the grand scheme of life. However, consider this: One single, thoughtless person did something bad, something hurtful, something wrong. Then dozens of people came forward to do something right, something good, something kind.

There is nothing insignificant or ridiculous about that. No, not one thing at all.