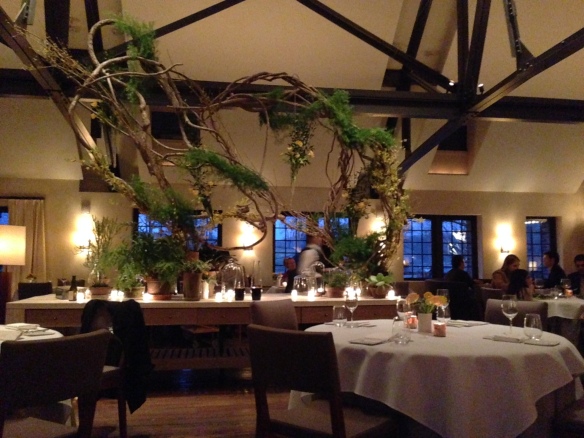 Recently, my husband and I celebrated out 22nd wedding anniversary.  When people learn we’ve been married that long, they carry on with like we’ve just discovered the cure for psoriasis or something.  But to us, 22 years doesn’t seem like a big deal.  In fact, by our families’ standards, we are rookies.  Hubby’s paternal grandparents (who both lived into their 90’s)  celebrated their 63rd wedding anniversary.  My own parents have been united (unified?  unionized?) for just over 60 years. 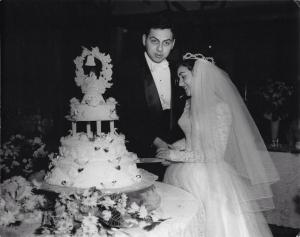 My parents on their wedding day.

That’s a long time.  Can you imagine owning the same pair of gloves for over 60 years?  Now imagine belonging to another human being for that length of a time.

Lower those hackles, people!  I know, you winced at my use of the words “owning” and “belonging,” but just what do you think marriage is anyway?  I’ll explain: it is a contract…a binding one.  Breaking that contract is usually very difficult and extremely expensive.  If it weren’t such a big deal, it would be as easy to extricate oneself from a marriage as, say, a gym membership.  Oh, wait a minute…

Ok, let me rephrase that:  Even though it is easier to “uncouple” from your spouse than it was for me to part company with Equinox Fitness (a maddening story for another time), you should consider yourself “locked in” like a long-term mortgage.  And I mean this in the best of ways!

To celebrate our 22 years together, Hubby and I invited our friends Jonas and Vanessa to join us for dinner at a restaurant called Blue Hill at Stone Barns.

What’s that you say?  You’ve never heard of it?  Those in the know simply refer to it as Stone Barns.  It’s one of those farm-to-table joints, and practically everything they serve comes from the fields, and the coops, or the pens.  There are no menus.  Instead, you’re given a little Field and Pasture booklet, which lists the things that are in season for every given month.  Then, you are offered two meal choices: “Grazing, Pecking and Rooting” which consists of many little plates (and I do mean many), or the “Farmer’s Feast,” which offers the same amount of food on fewer plates but with larger portions.   Both are designed around that day’s harvest.  Both selections can be ordered with food alone, or with wine pairings.

While mulling over our choices (the whole table must agree to have the same plan), Jonas and I ordered cocktails.  He wanted a cucumber martini, but was told cucumbers were out of season (they’re not faking it at Stone Barns).  I wished I had brought one with me.  Is that a cucumber in your evening bag, or are you just happy to order a martini?

After a brief confab, the four of us decided to be grazing peckers.  Since Jonas and I were already working on our cocktails, we two opted to graze with wine.  Then we nominated Hubby & Vanessa to be our designated drivers.  They agreed, and so our culinary adventure began.

While taking in the beautiful dining room, our first course arrived.  We were served, what looked like, four little maroon buttons.  Four.  Each one was about the size of a quarter.  They turned out to be beet jerky.  No, that is not a typo.  It was jerky made of beets, not beef. And it was delicious.  If you’re not a beet fan, well, too bad for you because beets are in season and we were served lots of them, in many different forms.  Jonas is not a great lover of beets (or he would have ordered a beet martini), but he still liked them…pretty much.  Vanessa is an accomplished cook.  In fact she has her own catering business.  So she could probably figure out how to make beet jerky, but I don’t think Jonas will be requesting it anytime soon.

While we were enjoying our “buttons,” the sommelier gave Jonas and I our first pairing.  Now, I’ve ordered wine pairings before and I know the drill: savor that pour, ‘cuz you ain’t gettin’ no more!  Not so at Stone Barns, my friends.  Jonas emptied his glass before the course was over and somebody was there lickity split to refill it.

Following the jerky, we munched on kale and cabbage chips, suspended in this weird contraption that looked like a tree.  Yum! 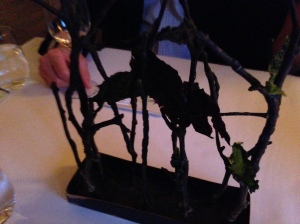 Kale & Cabbage Sitting In A Tree…

After that, the vino kept flowing and the plates kept coming. And everything was incredible.

At one point, our server came to our table and brightly suggested, “Let’s take a walk.”

I immediately assumed I had been talking loudly enough to warrant removal from the premises – like I said, they were not being stingy with the wine.  I stared blankly, first at the server and then at Vanessa, who just shrugged.  Hubby informed us that we were being relocated to dine in the kitchen for a course or two.  Sweet!  Why were we invited to go into the kitchen?  Who cares?!  I’ve learned never to question those little perks life occasionally throws your way. 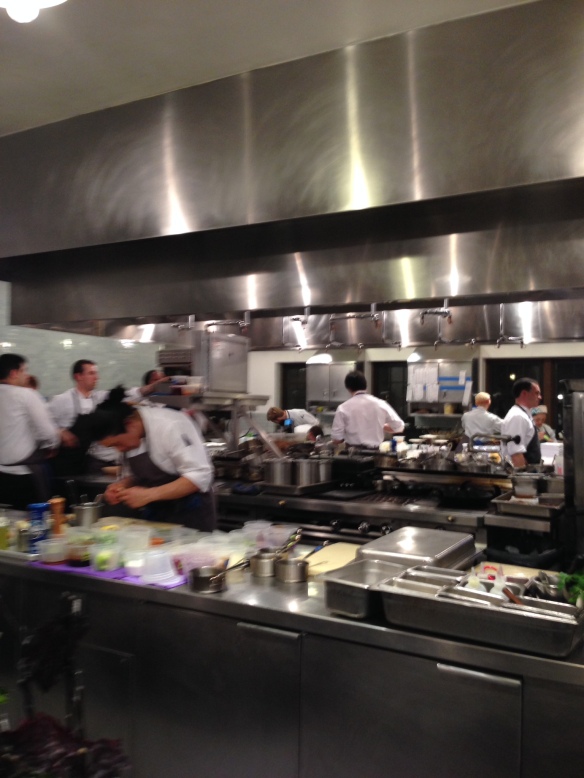 The kitchen was buzzing like Grand Central Station.  It looked like something out of a stylized, swanky movie – shiny and bright, filled with young, good-looking people (and not just because I was sporting a pair of wine goggles).

There was so much food and it was all incredibly delectable, but I knew I’d never be able to remember it all.  So, I wrote some of it down.  We had: 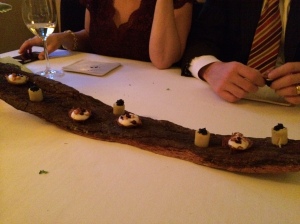 We ate off of bark. I swear to God.

Then, on top of all this, dessert was served.  There were merengue worms, white chocolate eggs filled with something sinfully rich, truffles, honey drizzled ice cream and much more! 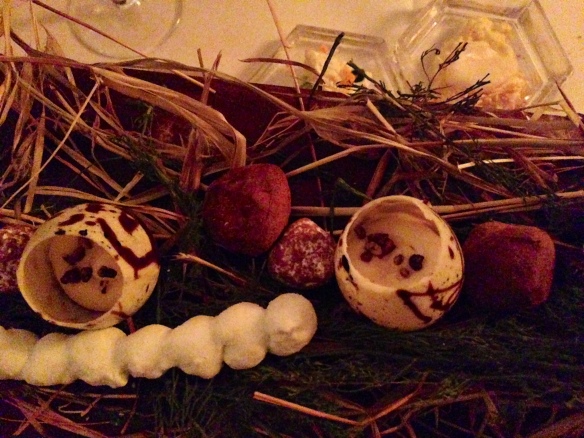 By the time the meal ended, over five hours later, we were stuffed and I was a wee bit tipsy (and by “tipsy” I mean “blotto”).

Jonas was none the worse for wear and proved it when the check arrived.  With the swift precision of a striking cobra WHOOSH he grabbed it before Hubby knew what happened.  We tried to argue, but our dear friends would not hear of it.  Now, let me tell you, this was far beyond generous.  A meal like that doesn’t come on the cheap.  In fact, to fairly reciprocate on their anniversary, Hubby and I will have to gift Jonas and Vanessa with a vacation home in the south of France.

I look forward to our next visit to Blue Hill at Stone Barns.  Oh yes!  We shall return, but next time, I will skip the cocktail and limit myself to two glasses of their fine wine.  And I will bring a cucumber in my evening bag, just in case they’re out of season. 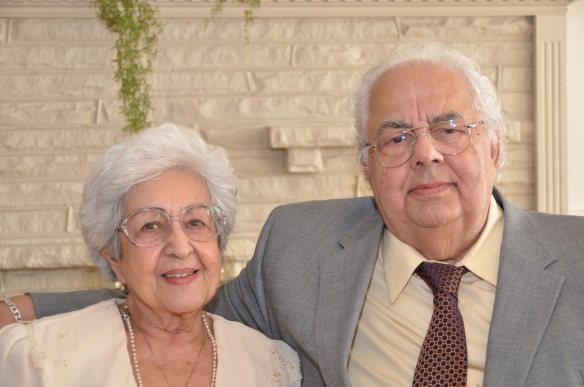 My parents today. Still belonging to each other.