A few Decembers ago, I was being really very Scroogie and not at all in the mood for the holidays.  Ever since that time, I’ve practically made it my business to immerse myself in holiday cheer (and I don’t mean by diving into a punch bowl).

No, what I’ve discovered is that nostalgia is the secret sauce that puts me in the festive swing of things. So, starting the day after Thanksgiving, I play holiday music in the house as I put up Christmas decorations and wrap the presents. Then, every night I tune into one of my favorite holiday programs – the one’s I grew up with.

My love of holiday films was sort of ignited by accident. At the age of 16, I saw a made-for-TV movie titled “It Happened One Christmas” starring Orson Wells, Marlo Thomas, Cloris Leachmen, Doris Roberts, Christopher Guest, and Beans Morrocco…an all-star lineup.

To hear the SNORK Christmas Classic “What The Dickens? Click here!

Marlo Thomas plays Mary Bailey Hatch, a woman contemplating suicide on Christmas Eve. She’s standing on a bridge and just when she’s about to jump, her guardian angel, Clara Oddbody (played by Cloris Leachman) jumps in the water and Mary ends up saving her instead.

As I described this plot to my parents, my father said, “It’s a wonderful life.”

I smiled at him. “Yes, dad. It sure is. So anyway, this guardian angel shows Mary what the world would have been like if she was never born…”

“No,” my father interrupted, again. “It’s a Wonderful Life. That’s the name of the original movie.”

He then explained that I was watching a knock-off of a great American classic. When I finally saw the Jimmy Stewart/Donna Reed version, I never looked back. It’s A Wonderful Life was the gateway drug that got me addicted to classic films in general and Christmas movies in particular.

Then about four years ago, I discovered the joy of listening to vintage radio programming, which inspired me to start SNORK, the podcast.

This brings me to the two little presents I’d like to give you, since you’ve been so good this year.

First, if you’ve been enjoying my podcast, I’m giving you a slew of old-time radio shows, all with a holiday theme.  Click Christmas Old Time Radio to enjoy everything from Burns and Allen to The Gift Of The Magi!

My second gift is a list of the best Christmas movies and shows of all time (or at least as far as I’m concerned).  You can’t watch these and remain a humbug!

This wonderful tale spans Christmas and New Year’s Eve, making it my favorite holiday twofer!  Cary Grant’s Johnny Case (a dashing, handsome, regular Joe) is engaged to the fabulously wealthy Julia Seton, played by Doris Nolan.  But is she really the right girl for him?  Perhaps he’d be better off with Julia’s down-to-earth sister Linda (played by none other than the great Katharine Hepburn). There are great party scenes, acrobatics, tantrums, and excessive drunkenness.  What more could you want from a holiday movie?

Barbara Stanwyck’s Elizabeth Lane has made a name for herself writing a food column about her incredible culinary and hostessing skills.  There’s only one problem – she can’t boil water.  Watch one lie lead to another and another when her unsuspecting publisher decides to run a feature of her entertaining a war hero for the holidays.  Where will Elizabeth get a Connecticut farmhouse, a husband and a baby in time for Christmas?  The movie also stars Dennis Morgan and Sydney Greenstreet.

It’s kind of a toss-up as to who performs the “Sisters” number better – Rosemary Clooney and Vera-Ellen or Bing Crosby and Danny Kaye in semi-drag.  With energized choreography and songs you know well enough to sing along to, this holiday classic will put you in a merry mood. It will also encourage you to go easy on the Christmas cookies as you marvel at Vera-Ellen’s teensy-weensy waistline.

Here’s Katharine Hepburn again, this time matched with Spencer Tracey. She’s the head of a television network’s research department and is dating an ambitious man who underestimates and under appreciates her, while using her smarts to advance his own career. Tracy’s an efficiency expert who’s wants to outfit her department with a computer called EMERAC (which Hepburn and her office mates think will replace them).  In one of my favorite scenes of all romantic comedies combined, Tracy takes Hepburn out to lunch – on the roof of her office building – and gives her a personality/IQ test.  It’s priceless.

Who doesn’t love Buddy the elf, his childlike innocence and his legendary sweet tooth? Fun and funny, Elf is the only Christmas movie on my list that was produced in this century.  Why?  Because unlike the recent oversupply of sappy, sentimental, tear-jerking films, Director Jon Favreau goes for old-school charm and comedy.  So, if you’re tired of crying into your fruitcake because some kid needs a Christmas miracle to find his deadbeat dad who is a perfect kidney match for his dying baby sister or because Gramps has to sell the farm but then buys the farm when he falls into the wheat thrasher on Christmas eve…well, you get the point. I’m talking to you Hallmark Channel! 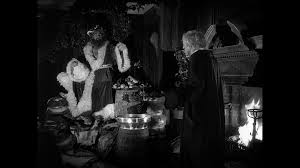 When David Niven finds himself preoccupied with building a cathedral and losing perspective on faith, charity and his lovely wife and daughter, he prays for guidance.  Enter Cary Grant as the angel Dudley.  Loretta Young, as the title character, teams up with Dudley (not knowing he’s heaven-sent), to help her husband reconnect with his family and his congregation. 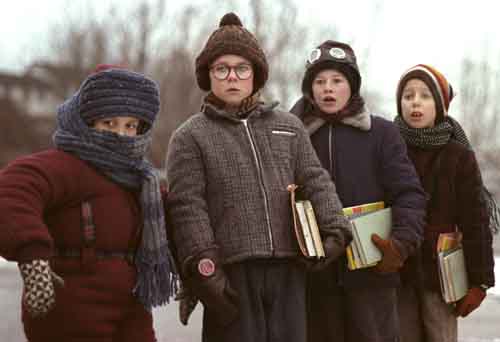 Christmas wishes in 1940’s Indiana can be frah-GEE-lay for a kid who wants nothing more than a BB gun under the tree – but his mother’s worried he’ll shoot his eye out.  Narrated by its author, Jean Shepherd, A Christmas Story follows Ralphie Parker as he schemes and daydreams over the elusive Red Ryder.  Darren McGavin and Melinda Dillion, as Ralphie’s parents, charm and delight.  I love everything about this movie – it is perfect! 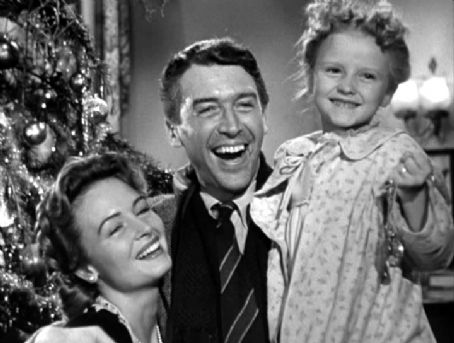 It’s hard to imagine, but this beloved Christmas classic was not well-received when it was originally released in 1946.  Now, no holiday season is complete without it.  When Harry Bailey wishes he’d never been born, his guardian angel takes him on an eye-opening odyssey.  He learns that his life touched so many others for the better and that every time a bell rings, an angel gets his wings.

This list is far from complete. It doesn’t include all the TV shows I’ve loved since childhood, like the original Grinch Who Stole Christmas, A Charlie Brown Christmas, Rudolph The Red-Nosed Reindeer, The Year Without A Santa Claus, and so many others.  And if I’m going to see them all before the end of the year, I better get cracking!

In the meantime, I wish you a very Merry Christmas and a Happy New Year.  See you 2016!

3 thoughts on “My Gifts To You”